I take the ferry from  Darwin to Bathurst Island of the Tiwi Islands, c. 80 km north of Darwin. The ferry makes a day trip around 3 times a week. There is an airstrip on the island, so a flight is also possible. 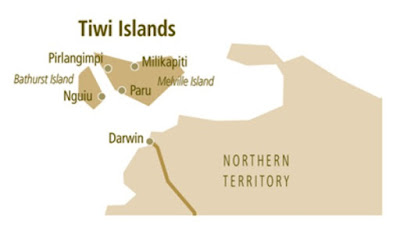 Most of the population of Bathurst Island lives in the village of Nguiu (now officially known as Wurrumiyanga), probably because it is sheltered and has a good harbour.
﻿ 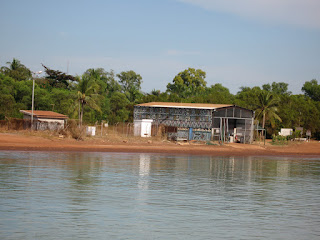 I notice, as I approach that tbere are buildings that don't appear to be cyclone-proof. Darwin was levelled by Cyclone Tracey in 1974 (and there is a dramatic tape-recording of the storm in a darkened room in Darwin Museum) and all Darwin buildings since then are very robustly built. I raised this question with my tour-guide on the island, and he told me that cyclones never hit Nguiu, but pass between the islands and the Australian coast. According to my guide, Nguiu is sunny all year round and it only rains at night. I am not sure how to reconcile this with the fact that the Tiwi Islands are the wettest area of Australia, lashed by the Monsoons every February.

In aboriginal culture, there was no accumulation of wealth. One worked (women gathering and men hunting) in order to eat. When the appetite was satisfied, the remaining time was spent talking, singing, dancing, playing, story-telling, reciting poetry, or creating works of art. So it is only natural to find the  community centre decorated top to bottom, inside and out, with works of art. Traditionally arts were for amusement, not for profit. 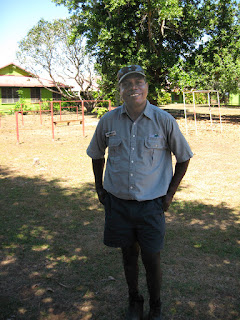 This is my guide on the island, named Fonda. Aboriginals are given a western name that we mono-glots can grasp, as well as their native name. I tend to call ours guide "Mr Fonda," because "Fonda" sounds to me like a surname.

Mr Fonda tells us that the word for white people in the Tiwi language is "Hot red faces." "But," he says, "The joke  is now on us, because now white people no longer get sunburnt, but we do."

My first thought was that this native sun-burning must be a consequence of the hole in the Ozone Layer (at that time, 2007, in the news), but that inference was wrong. The burning is due to the indigenous change of diet. In order to make Vitamin D (and not burn ), the sun has to find a number of catalysts in the skin, including Vitamins A, C and E, which were abundant in the native diet, which has been replaced by a western diet heavy in wheat and sugar, but deficient in vitamins and other nutrients.
Mr Fonda is a jolly person, as were others we met in course of our visit. I said to him that his people seemed to be very jolly. His reply was, "the reason we are jolly is that we live in terror."
I saw a hint of this terror in his face when we visited the womens' craft workshop. He was somewhat terrified that he might see his sister. Boys are separated from their sisters at puberty and never allowed to see them again.

However, the greatest element of the terror is the tradition of vengeance. A wrong done to one's family should be avenged. This vengeance is often wreaked generations after the wrong has been inflicted. In fact, it is quite usual for the person seeking revenge to become friendly with the object of his retribution in order to put him off guard. You never really know for sure that your good neighbour is not harbouring a grievance done to his ancestor by yours that he must avenge before his life is done.

There are roads on the island, but we took the guided walking tour and limited our visit to Nguiu. 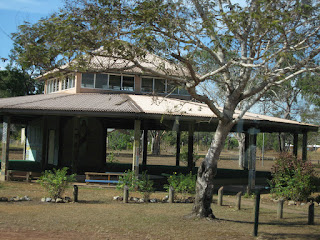 Aboriginal culture is, of course, an outdoor culture, which is maintained in public buildings of today.

Art is continuously engaged to decorate the human environment. Figures representing mythological creatures and characters abound in the art work. Mythology is handed down from generation to generation from more than 5,000 years ago when the Tiwi people arrived here, but is not considered something of the distant past, but part of the dream-world of the present time, as real as the physical environment. 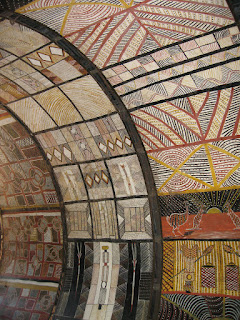 Every inch of this community building is decorated with art-works.

Buildings are of recent generations. Previous generations lived and slept outdoors. The aboriginals regarded the land as being without owners, but shared by all creatures. I put this to Mr Fonda, but he replied: "O no, in fact I own land on the other side of this island." However, his ownership is of the type described in the book I, the Aboriginal: a person of standing in the community is often appointed owner of an area of land. This does not give him the rights of ownership enjoyed in our western culture. He has no right to exploit or profit from the land or chop down trees, plough sow or reap or build. His ownership is an honour and a trust As owner, he is the protector of the land, and stands up for the land should anyone try to abuse it. This ownership of honour is personal and not passed on to his heirs.
I asked Mr Fonda if he had any fear that American, Japanese, Dutch or other nationals would come and take over Bathurst Island, seeing it was such a paradise, and turn it into a Resort. He said "no," and I asked him why. "Because, when the Tiwi People first came here, the islands were given to them by the Godess to belong to the Tiwi People forever."
I am afraid that Mr Fonda's confidence is unfounded. The type of ownership he described has no place in Australian Law. Instead the islands legally belong to to the Tiwi Land Council, and since I spoke to Mr Fonda, large parts of the forest have been cleared to make way for agriculture. Mining operations are also engaged. Paradise is giving way to western-style economics.

My tour-group at the mens' craft workshops. Men's craft tends to be works of art in skulpture or paintings. Each piece is the creation of the artists. The women take a different view: they tend tomake things to existing patterns. They have a somewhat skeptical attitude to mens' attempts at self-expression and consider their own work much more practical, normal and beautiful.
Some Tiwi artists have attained international success. This does not make them wealthty, because all aboriginals feel the duty to share everything with their community and their skin of any origin.

In the women's craft work-shop. Products from here are exported, a large percentage of the output going to America, where craft products are highly valued.

Resting in the shade of trees, an ancient custom.

Our group does the same. Wonderful respite from the hot sun. 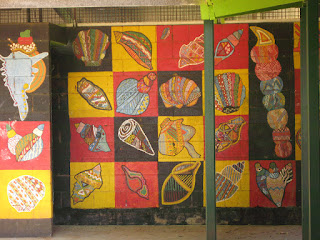 Past generations speared fish in the bounteous sea and also fed off the many wild animals and birds on the islands. Cocunuts are plentiful and provided food at all stages from green to ripe. The forests and the sea provided plenty of vegetable matter. Mr Fonda told me that, when he was a boy, they would stick their arm into a hole in a tree to pull out a tasty snake, but that nowadays a forked stick is  used instead. "So," I said, "You had sunny weather all year round and an abundance of food at all times." "Yes," said Mr Fonda, "It was paradise."
Paradise is disappearing, however. Children no longer play at spear-throwing, collecting sea-vegetables or the other traditional play-themes, but want to watch television and play computer games. They are no longer happy to go naked, but want clothes and shoes, and adolescents take to drinkinh alcohol. They queue up outside the community centre waiting for the bar to open.

The make-shift museum on the island is the second most visited museum in Australia. Paleolithic in culture before the arrival of the Europeans, there is a great range of wooden implements and weapons. We tend to think od our sone-age weapons having stone or flint points. Looking at the recent stone-age tools of Australia, however, I guess that the everyday spears and weapons of our own ancient people were timber, with timber points and edges. Hard woods can be made very hard by treating with vegetable oils and sharpened to resilient points and edges.
﻿ 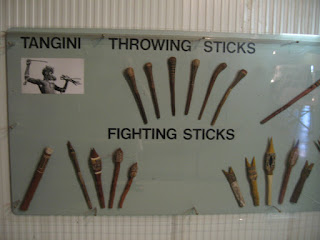 A cut-out canoe; not at all as elegant as the cut-out Irish stone-age canoe in the National Museum of Ireland, but one used less than a hundred years ago.
﻿

This is a photo of a picture in the museum. It shows a previous generation of men engaged in their ritual activities. The natives had two types of secret society, the mens' and the womens'. The men spent six months of the year during which they gathered together for rituals, dancing and story-telling. This is just like the Fianna of ancient Ireland, indicating that the tradition was carried by the first emigrants from Africa, who arrived in Australia 10,000 years ago, and in Ireland 8,000 years ago. In Ireland, the Fianna spent six months (May to November) hunting and fighting and the other xix months with poetry and story-telling. This was a natural division linked to the long days of Summer and the short days of Winter. The custom in Tiwi (and other parts of Australia) is not supported by long and short days, but is often found nonetheless. 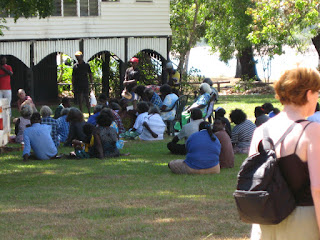 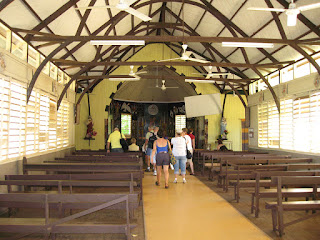 Nguiu Catholic church and the story of the mission: coming soon.

The aboriginal population throughout Australia is divided into 8 "skins." Everybody knows his/her skin from early in life. Marriage is not permitted between people of the same skin, or the most closely related skins. Optimally one should marry a person of the opposite skin, but this is not always possible, so the skins closest to the opposite skin may also provide a partner. A man acquires the right to marry by graduating to marriagable status by performance of duties thrust on him at various stages of life as he matures. Romantic alliances are not permitted and in the past were punished by stoning to death. Severe chastity laws like these are necessary to maintain a healthty gene-pool when the total population is only a few thousand.
The population of Nguiu lived in symbiotic relationship with nature for 5,000 years, until the whites arrived with their destructive culture. 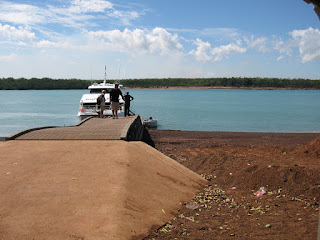