Reggio reminds me of Dublin in the 1950s

When I was 12, on my first year in secondary school, faced with an exam question on the geographic location of Ireland, I was struck with a flash of inspiration, and I wrote:

"Ireland is at the centre of the earth."

Mr Mackey gave me zero marks for this reply, and wrote in the margin: " I don't know what you were thinking."

This may be because he neglected to read the rest of my answer, which was somewhat as follows: "The world is shaped like a ball. You can choose any place you like as the centre of (the surface of) a ball. The current attitude that Ireland is a peripheral place off the west coast of (a central) Europe underlies our poor economic performance. If we, instead, were to regard Ireland as centrally located between Europe and the Americas, we could become a prosperous hub of world trade."

This was 1955. Ireland had been in an economic depression for 30 years and the prospect for most of my schoolmates was the emigrant ship. The railways were being closed, people were just locking their homes and leaving.
This is how it is in Reggio today. Calabrians still regard their area as a peripheral area and allow prosperity to pass them by.
An idea like mine is taken from the ether - the sphere of consciousness that surrounds the earth. Fortunately for Ireland, another person was grasping the same idea from the ether: T K Whitaker was an up-and-coming economist in the Department of Finance. He put forward the view that Ireland should forsake its protectionist economic policies and open up to trade. The result was our First Programme for Economic Expansion (1957) which brought the first period of growth for forty years. The changed attitude lead ultimately to the Celtic Tiger.

Now we are looking forward to the prospect of a trade agreement between Europe and USA (the "Transatlantic Trade and Investment Partnership" under negotiation) which will enable Ireland to be truly a hub of trade between the two continents, fulfilling the vision of St Columkille (of the 6th century, surviving in a manuscript of the 11th century) that:

"Ireland will be prosperous again. No other country on the face of the earth will be more prosperous than she."


In Columkille's day, Ireland was "a land of Saints and Scholars" and a prosperous hub of learning and trade serving the whole of Europe. He predicted the coming of the Vikings, and then the conquest by a  foreign power that would last 700 years, before liberation and the return of prosperity. There was no sign of prosperity in the 1950s, and not until we made ourselves again a centre of trade and learning.

Reggio, Calabria, Italy, reminds me of Dublin in the 1950s
Last November, I visited Reggio in the south of Italy. It reminded me of Ireland in the fifties, and I found that they held onto the same regressive attitude: that they were a peripheral, forgotten region (of Italy). Despite having a sea-front promenade identified as "the most beautiful kilometre in Italy," and many other potential attractions, the official website proclaimed it as a place to visit only on your way to someplace else (e.g., Sicily).

Like Ireland, Calabria has a long history of emigration, and has a diaspora in many of the same countries as we. We found, among people with whom we chatted, a similar pattern of relatives in America and Australia as our own.

There is some hope for the future of Reggio. In the nineties, they had a period of development called "The Reggio Spring," under a charismatic Mayor, (Italo Falcomata) when the seafront promenade was magnificently upgraded and many improvements wrought.

However, the reforms were only half-baked, neglecting to take on the random parking and haphazard building, and running up debt. For example, an  extensive car-park was built behind the main train station, which should have allowed the piazza in front of the station to revert to being a glamorous piazza. The official car-park remains empty and the piazza clogged with cars.

Then the recession came; and now the whole country is sinking under the weight of government debt and a deluge of refugees from Syria and Africa.

But, there is an incipient spirit of revival, a movement for community development and a new intelligentsia emerging from its new universities. The grip of the Mafia and the church needs to be loosened and individual enterprise allowed to prosper. I heard of people who in previous years tried to make a difference who were asked to leave and then disappeared never to be seen again.

Pope Francis, the last pope according to St Malachy, who came not from the centre of the earth but the end of the earth, did not baulk at visiting Calabria - a few months before me - and denouncing not only the Mafia but the church's wealth machine.

While I was there, the election of a new Mayor took place, the office having been suspended for several years due to financial irregularities and overspending. There were around 40 candidates, but only 4 or 5 real contenders. The most eye-catching poster proclaimed "Bastad Immigranti," (which means "Stop Immigrants"). Others cribbed about bin-charges and  other aspects of austerity, but I favoured the candidate whose poster simply said "Falcomata for Reggio." After all, if you want to protest about austerity measures, you can take part in a street protest or write a letter to the papers. What has that to do with being Mayor of a city, a job that requires you to do your best to run the city? Being against immigrants or repressive taxes shows no intention whatsoever to focus on good government.

My chosen  candidate, Giuseppe Falcomata, was successful. The new mayor is a son of the mayor who brought about the Reggio Spring. 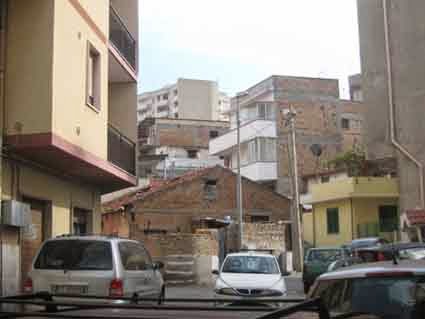 Random parking of cars and haphazard development indicate that the reforms of the Reggio Spring did not go far enough. Instead of parking in the new, empty, car parks behind the main train station, for example, parked cars continue to clog the roads in front of the station. The randomness of apartment building indicates either an incompetent or a corrupt planning regime. Compare this to Estapona in Spain, also to be found (soon) in Krunchie's World, where local government is excellent and everything in proper order.

Supporters outside Falcomata's constituency office waiting for the results of the Mayoral election (which were delayed because of a re-count). Note: all men; women tend not to involve themselves visibly in politics or business. 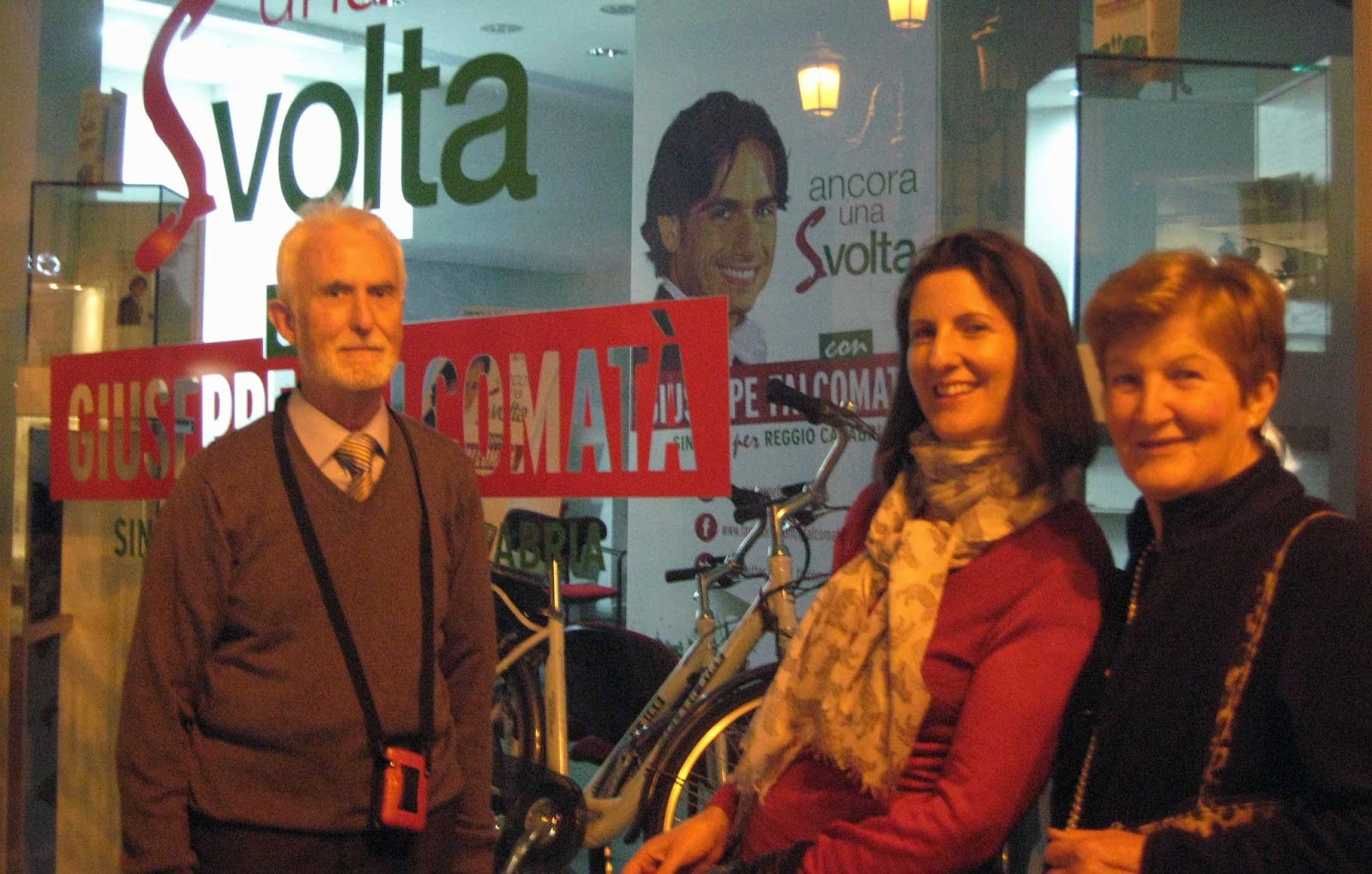 I just mention Reggio as an area that reminds me of the Ireland in which I was brought up, where the feelings of peripherallity and backwardness held us back, until we changed our attitude and realised we could be the centre of the earth.